"Demon Slayer -Kimetsu no Yaiba- The Movie: Mugen Train" Arrives To The Station On Blu-Ray™ On December 21, 2021

CULVER CITY, Calif., Sept. 15, 2021 /PRNewswire/ -- The record-breaking global phenomenon Demon Slayer -Kimetsu no Yaiba- The Movie: Mugen Train arrives with both a Limited Edition Blu-ray™ from Aniplex of America and Standard Edition Blu-ray from Funimation for the first time in the U.S. on December 21, 2021. 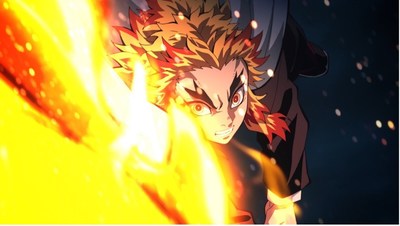 The Standard Edition Blu-ray will be available from Funimation through the Funimation Shop as well as Amazon, Walmart, Best Buy, RightStuf, and more.

The critically acclaimed Demon Slayer -Kimetsu no Yaiba- The Movie: Mugen Train earned over $470 million globally at the box office becoming the #1 film worldwide in 2020, the first non-Hollywood, non-U.S. film to achieve this. The film opened in the U.S. and Canada on April 23 as the #1 Foreign-Language film debut in U.S. box office history and hitting #1 at the box office the second week of release, earning more than $49 million+ to date. The film is currently available to stream exclusively to Funimation subscribers in the United States, Canada, the United Kingdom, Ireland, Australia, New Zealand, Mexico, Brazil, Peru, Chile, and Columbia.

The Demon Slayer: Kimetsu no Yaiba TV series premiered in 2019 and is based on Koyoharu Gotoge's manga, which boasts over 150 million copies in circulation in Japan. Demon Slayer: Kimetsu no Yaiba is an action-packed, thrilling tale of a young man in search of a cure for his sister, who has been turned into a demon after their family is viciously slaughtered by demons.

About Aniplex of America Inc.

If it's anime, it's Funimation.

As the market leader in anime, we proudly deliver incredible fan experiences across television, feature films, events, collectibles, and the Funimation App.

Headquartered in the US and connected by a global network, our anime-obsessed team serves the fandom in over 52 countries and 10 languages. With over 400 team members, we've built a global community where fans and their passion will always have a place to belong.